Underground Siena: the mythical river and the Bottini

Home Curiosity Underground Siena: the mythical river and the Bottini 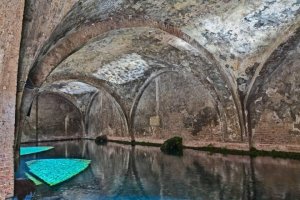 Underground Siena: the mythical river and the Bottini

“You will see them amongst those vain people who hope in Talamone, and will lose more hope than to find Diana”, in this way Dante Alighieri, through the voice of the unfortunate Sapia, defined the Sienese in the 13th canto/chapter of Purgatory, a vain people in the search of an imaginary river.

And its true that in Siena for centuries people believed in the existence of an underground spring that crossed the city and much money and energy was put into searching for it.

Siena stands on three hills, in a privileged position with respect to the unhealthy air that you would breath in the plains, but it is disadvantaged from the point of view of its vicinity to water basins: the largest rivers were far away, whilst the ones nearby had a limited flow of water for most of the year.

The lack of water has represented a serious problem for the city governors for a long time, and forced them to deal with the needs of hygiene, food and industrial factories and mills that supplied flour to Siena.

The belief in the existence of a mythical underground river was therefore born from a strong concrete need and was fueled by some “curious” facts: in some areas of the city (Pian dei Mantellini and Porta San Marco in particular) nearly all the walls of the cellars were constantly extremely damp, and even today this is the case. In the same areas it was also said that you could hear the sound of a river flowing under the stones (and there are people who swear they can hear it today on quiet nights).

The search for the mythical stream, which was called Diana from the start, began in 1176 and was initiated by the friars of the convent of San Niccolò del Carmine. After digging some wells, a first underground spring was found and was named “Diana’s well”. A century later, in 1295, the City General Council wanted to continue the search for the underground river. So the Council continued to finance the work, consulting astrologers and fortune-tellers to identity the best places to dig, but there was still no sign of the river.

As the idea of the existence of an underground river became more and more of a legend, it was also understood that the soil of the city was very porous and permeable, and could function as a collector of water veins and reservoirs. A dense network of underground tunnels was dug in the rock, and thanks to its characteristics, it filtered the rain water, purifying it, and conveyed it into a groove called “gorello”. The slight slope of the “gorello” allowed the water to be carried throughout the city, to flow into the public basins/reservoirs.

These underground tunnels were almost always built with the typical “barrel” vault, hence the name “Bottini”.

Before the end of the 15th century, the maximum extension of the underground network was reached: the tunnels still extend today for about 25 km and are for the most part dug into the rock. The walls are covered with calcium deposits, stalactites and stalagmites.

A real aqueduct that for centuries represented the only source of water for the city: it was replaced with the modern aqueduct of the Vivo springs only after the first world war.

The network of “Bottini” is still fully functional and continues to efficiently feed the historic sources of the city! This is possible above all thanks to an extraordinary association of volunteers (whose name couldn’t not be “La Diana”) which, since the mid 90’s, has declared its objective to be the study, enhancement and protection of the Bottini, the monumental sources and of all the historical, cultural and architectural heritage connected to the Acque di Siena.

Some segments of this extraordinary underground world (as well as the special “Museo dell’Acqua in the Fonti di Pescaia) can be visited: a fascinating experience which takes you back in time to see the city with different eyes.

Given the particularity of the visit, it is necessary to book, and once the current pandemic emergency is over, this can be done through the website of the Municipality of Siena: https://www.comune.siena.it/La-Citta/Cultura/Strutture-Museali/Bottini

In the ancient center of Siena there is a “Via della Diana” and a “Passo della Diana” which is the name of the drum roll during the historic walk just before the Palio: in Siena, the myth and the memory of the legenday stream is still alive today!